Just What Is Organizational Culture Anyway?

When VITAL WorkLife and Cejka Search canvassed physicians for their 2017 Physician and Advanced Practitioner Well Being Survey, an eye-opening perspective emerged. Respondents rated organizational culture as the most important factor in maintaining physician well being.1 It was rated even more highly than two other critical factors, good business practices and physician self-care. 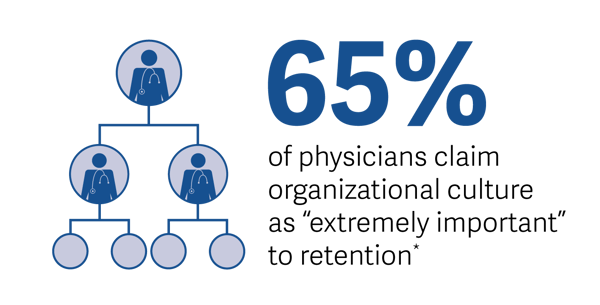 For leaders concerned with promoting the well being of their providers (and the consequences of well being, engagement and retention)2 the question of culture is crucial.

But getting a handle on something as subtle as an organization’s culture isn’t easy. “If you want to provoke a vigorous debate, start a conversation on organizational culture,” writes Michael D. Watkins in the Harvard Business Review.3

In an effort to garner some clarity, Watkins set up a conversation on LinkedIn with executives from a number of industries. As he expected, responses ranged widely on attitudes and approaches—here are some of the key themes:

Culture is a set of consistent, observable patterns of behavior. “Aristotle said, ‘We are what we repeatedly do.’ This view elevates repeated behavior or habits as the core of culture and deemphasizes what people feel, think or believe,” Watkins writes.

Culture is shaped by incentives. That is, people “repeatedly do” what they are rewarded for doing, and the rewards can be either monetary and non-monetary—status, recognition and advancement.

Culture defines “what is” and “why-is.” In a more subjective sense, culture is the set of “jointly-held beliefs” (Watkins) and understandings about what the organization is really doing and why it is doing it.

Clearly, a positive organizational culture is a complex creation, a dynamic mix of deliberate efforts by leadership, spontaneous human interactions, and subtle states of mind. It can’t be made to order, but it can be fostered if everyone in the organization understands how important it is.

For an additional perspective on organization culture and its effects on recruitment and retention—one emphasizing communication as a cultural value—see our article “Organizational Retention: How to Build a Culture Optimal for Physicians.”