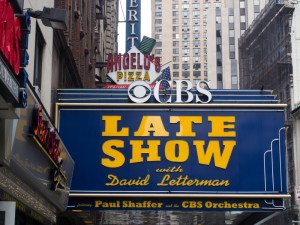 A few weeks ago David Letterman closed the curtain on his legendary 33-year run as America’s favorite late night television host. The emotional, star-studded finale was an appropriate send-off for a man who’s been referred to as one of the most influential people in television history. Letterman has been a staple of popular culture for more than three decades.  Even as far back as the late 1980's his influence was clear.  I still remember participating in a spoof of the show—complete with our own gap-toothed host, stupid human tricks and sparkling water—as part of a high school tailgating contest. Letterman’s award-winning performances have engaged audiences and critics alike, but his successful career also offers lessons on engagement for business leaders. Jill Vitiello shares the following top 10 list.

Number 10. Be yourself. Letterman never lost sight of his roots and neither should you. Remembering where you came from will make it easier for employees to approach you with the ideas or concerns that will drive your company’s performance.

Number 9. Identify a common goal. Anyone who tuned in to the Late Show with David Letterman wanted to be entertained, and from the opening monologue to the last note played by the musical guest, Letterman made that happen five nights a week. For business leaders, it is just as important to align employees with your organization’s mission and then give them the necessary tools to succeed.

Number 8. Delegate. From Paul Shaffer to Biff Henderson, Letterman relied on a team to achieve his goals. Calling on managers or employee ambassadors to reinforce key messages will help workers align with your organization’s mission and get results.

Number 7. Be transparent. In the days after 9/11, Letterman’s honesty brought the nation together and made it OK to laugh again. Being candid about emotions in the toughest of situations can help employees rally around you and your company.

Number 6. Think creatively. Stupid Pet Tricks and the “Top 10” list were just two of the Late Show’s iconic funny bits. For business leaders, finding new and innovative ways to engage employees can be a very effective strategy with long-lasting outcomes.

Number 5. Remain flexible. When Jay Leno, not Letterman, was chosen to replace Johnny Carson as host of The Tonight Show, Letterman didn’t let the setback stop him. Having an alternate plan can also help business leaders ensure that employees stay continuously engaged.

Number 4. Stay relevant. A lot has changed since Letterman hosted his first show in 1982. Keeping up with the times enabled him to retain existing audiences and even attract new ones over the years. The same holds true in business, where succinct communications, face-to-face forums and social media are now the preferred engagement tools.

Number 3. Be present. After more than 6,000 nights on the air, it would have been easy for Letterman to become complacent. But, he didn’t. Right up until the last show, he remained interested in his guests and what they had to offer. For leaders, this serves as an important reminder to “show up” both in person and via various communication channels.

Number 2. Mentor new talent. The Dave Matthews Band is just one of the many talents to get their big break on the Late Show. Giving less experienced people an opportunity to shine and fostering their career growth can motivate your entire team.

Number 1. Recognize the contributions of others. Since he began hosting the Late Show, Letterman graciously thanked his guests and audiences for their contributions to his success. Humility is, perhaps, one of Letterman’s most engaging qualities. It has gone a long way in making him the longest-serving late night talk show host, and is a must for positive outcomes in the workplace too.

Leigh Anne joined VITAL WorkLife in 2015 as a consultant and is now the Senior Marketing Manager. With deep experience in healthcare and med/surg devices, Leigh Anne has provided strong leadership, strategic marketing guidance and a client-centered focus in her roles, both as a consultant and in management positions at a variety of organizations.