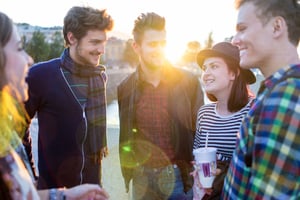 In 2012, a record 21.6 million young adults ages 21 to 34 in the US were living in their parents' homes according to the Pew Research Center.

What's driving the rise in numbers? One major factor has been the recession. According to Pew just 63% of 18- to 31-year-olds had jobs, down from the 70% of their same-aged counterparts who had jobs in 2007. Unemployed Millennials are also much more likely than employed Millennials to be living with their parents (45% versus 29%).

What's driving the rise in numbers? One major factor has been the recession. According to Pew just 63% of 18- to 31-year-olds had jobs, down from the 70% of their same-aged counterparts who had jobs in 2007. Unemployed Millennials are also much more likely than employed Millennials to be living with their parents (45% versus 29%).

Americans are not unique in this regard. In Britain, they're called KIPPERS (Kids In Parents' Pockets Eroding Retirement Savings). In Australia they're referred to as Boomerang Kids (you keep throwing them out and they keep coming back home).

The transition from independent living to living with parents can be stressful for the young adult involved—which can in turn be a source of stress and tension for the whole family. "There's a period of adjustment as the parent or parents and the returning adult negiotiate a 'contract' that works for both sides," says Friday.

Rent or No Rent?

There's no single answer that works for all families. Some parents believe the young adult should pay his or her own way—although many offer very low rents or allow rent to be paid in chores rather than dollars. Other parents allow their young adults to live rent-free in order to focus on finishing a degree, finding a job or putting together enough money for a rental deposit or down payment toward a place of his or her own.

"It's important to be very clear about what's expected—not just about rent, but about household chores, curfew, overnight guests, noise levels and expected date of departure if you have one," says Friday.

"It also helps to write an agreement that all parties sign," continues Friday. "It doesn't mean you can't add to the list of dos or don'ts, or renegotiate as issues occur, but the agreement gives you a foundation on which to build."

The kid who went away to college isn't the same person who's moving back home. He or she has had years of independent decision making and will likely resent a parent who wants to impose rules that made sense for a 16-year old.

Conversely, young adults may find it odd that homemade meals aren't provided every evening or that they're expected to check the oil and fill the tank if they want to borrow the family car.

"You may find yourself or your young adult falling into roles and behaviors that feel very familiar—but simply aren't appropriate any more," notes Friday. "For example, when you see yourself scolding or speaking to a young adult in a way you wouldn't treat any other adult you know, it helps if you can stop and apologize."

Don't be alarmed if it takes some time to adjust—or if things start going sour after a stellar start.

Over time, depression can be an issue for young adults who can't see how they'll ever afford to move or think they're perceived by peers or siblings as a "loser." Parents, too, can be embarrassed or resentful that their adult children's struggles may make them look like less than perfect parents.

"In respecting their adult children's boundaries, some parents bottle up anger instead of addressing issues that need to be addressed," says Friday. "If you're experiencing stress, frustration, irritation or concern as a result of a child returning home, talking to an objective counselor can help."

How Your EAP Benefit Can Help

Simply call 800.383.1908 for a free, confidential consultation. Our counselors can help you evaluate any issues you or your young adult child are facing over the phone. We can also schedule free face-to-face counseling at a time and place that's convenient for you.

Every member of the family can call whenever they've got an issue they'd like to discuss such as:

"Talking through the problems doesn't make them go away, but an EAP consultant can help you create strategies for addressing them that won't add to the tension in the household," says Friday.

A single parent contacted VITAL WorkLife about a 22-year old son who had no job and spent his days using marijuana and doing large amounts of "gaming" (online and home game systems). She had attempted to get him jobs but he never kept them long. He had any number of excuses, blamed others and showed outright hostility toward his mom. It was easy for the son to "guilt trip" his mother because she indeed did feel guilty and blamed herself for not providing the ideal life for him.

Instead of holding her son accountable, she saw his behavior—abuse of her, lack of motivation, and drug use—as products of what she believed to be depression. She thought that if he would work with a counselor, these mental health issues could be addressed and all the resulting problems would disappear.

By speaking with the consultant, she was able to see how she had become an enabler for the son's behavior. She was able to see that the best motivator for her son was for him to experience the natural consequences for his choices.

The mother had already seen this before when she had "had enough" at points along the way. During these times, the son did seek and find work, likely knowing that his mom was serious about what she said (get a job or get out). Her level of seriousness would deteriorate and she would revert back to old patterns. The son would quit or lose his job and his mother would not follow through on having him leave.

Her VITAL WorkLife consultant helped get her the counseling and support she needed to set appropriate boundaries and enforce them.

If you are a parent of an adult child living at home, know that you are not alone. VITAL WorkLife counselors and consultants can help with emotional support, family communication, coping with stress, planning and much more. Your EAP can also help with financial concerns and budgeting. There are also hundreds of helpful articles and links to resources, including the four articles listed below, that address the stressors of kids moving away, and kids moving: