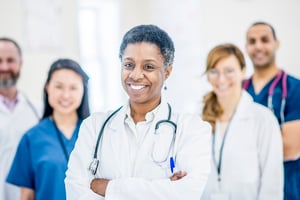 On December 20, 2020, Susan Moore passed away from complications of COVID-19. Susan Moore, who is actually Dr. Susan Moore, is a Black female physician who despite her medical degree and knowledge, reportedly fell victim to the bias and racism that affects so many Black people and people of color in our healthcare systems.

The words “racial bias” and “racism” are words that make people uncomfortable. As doctors and healthcare professionals, we shudder at such terminology because our oath is to do no harm and to act to the highest good for the patient. However, in 2020 alone, a study of selected states and cities with data on COVID-19 deaths by race and ethnicity showed 34% of deaths were among non-Hispanic, Black people. This group accounts for only 12% of the population[i]. This is but one statistic in one domain in which Black, Hispanic, Indigenous and other people of color are being disproportionately affected by inequities in healthcare.

“But what does racism have to do with it?” one might ask.

Marginalized groups often experience bias in healthcare settings, resulting in inequitable treatment[ii]. Let’s take Dr. Susan Moore as an example. During her hospital stay she was treated by a White male doctor and nurse who, when she complained of shortness of breath, reportedly did not believe her. In fact, in the last video she recorded before she died, Dr. Moore stated the physician told her she could not be feeling shortness of breath even though her oxygen saturations indicated that she was in distress. She also reported being denied pain medication during her stay when she complained of chest pain from the pneumonia she experienced. Subsequently, she was sent home, and was later re-admitted. Dr. Moore chose a different location, and although she received the proper care, the damage had already been done. She succumbed to the complications of her illness.

Unfortunately, this is not an uncommon scenario in the treatment of Black patients. Black and Hispanic people have experienced this type of mistreatment for decades. The number of deaths per 100,000 live births is three times higher in Black women than White women[iii]. Black people are more likely to die of all cancers combined than any other racial or ethnic group, according to the American Cancer Society. This is a systemic issue, tied to racial bias[iv], that is affecting Black and People of Color across the board.

Racism in the Workplace

Racism doesn’t only affect our patients of color; it also affects doctors and medical professionals. A recent example that made national news is when North Carolina commissioner Tony Collins, a White male, refused to address Dr. Carrie Rosario as “Dr. Rosario” even after repeated requests. He publicly chastised her, calling her Mrs. Rosario and Carrie.

I cannot count the number of times that I, as a Black female physician, have been addressed by my first name or called Ms. Clairborne even after introducing myself as Dr. Clairborne. I’ve spoken with fellow colleagues who have been addressed as Ms. or called by their first name by a White colleague or staff while in the presence of their White counterpart who was addressed as “Doctor.” I, and many of my colleagues, have been refused by patients because of the color of our skin and I personally have been called derogatory names like “colored” and even the dreaded “N-word” by patients.

My experiences are common for clinicians of color who are routinely exposed to instances of racism and discrimination at work. In a recent study[v], 23% of participants (who were clinicians of color) reported that a patient had directly refused their care specifically due to their race. Microaggressions experienced at work and symptoms of secondary traumatic stress were significantly correlated. The qualitative data revealed the majority of participants had experienced significant racism from their patients, colleagues and institutions.

While these may seem inconsequential to some, these are ways racism shows up every day in the workplace, between doctors, doctors and patients and doctors and their staff members.

What can we do about it?

The obvious answer is that the system needs to change. There needs to be more effort around Diversity, Equity and Inclusion. However, the not so obvious answer is that everyone must look inward at how they contribute to racism and a white supremacy culture of thinking. This is of critical importance because the system is made of many people and if there is no change at the individual level, then the system cannot and will not change.

There are many resources to begin this individual journey. Here are a few to note:

MEMBERS: To access your Well Being Resources, contact us at 877.731.3949, through the VITAL WorkLife App or contact us online. On the app, you can schedule an appointment to get started with peer coaching.

If your organization is committed to this work, they might even seek out more learning opportunities such as investing in anti-racism training or putting their leadership and staff through online courses. The point is, the journey must start somewhere, and that first step is admitting the problem exists and is having a deadly impact. No one wins in racism. No one.

Dr. Maiysha Clairborne is an integrative family physician, and founder of Stress Free Mom MD, Next Level Physicians Academy, & the Mind Re-Mapping Academy: School of NLP, Hypnosis, & Time Line Therapy®. She has been a Peer Coach with VITAL WorkLife since 2016. With over 20 years experience, she is passionate about transforming the lives of her medical entrepreneur colleagues, and being a voice for the thousands of burned out medical professionals who desire to step off the hamster wheel and take back the reigns of their career & lives. As a speaker, trainer, and coach, Dr. Maiysha loves empowering her students & clients in business, entrepreneurship and the power of the unconscious mind. Her own struggle with burnout is what originally inspired her to step outside the box, and her business coaching, Mind ReMapping, and NLP Coach Training programs now help doctors and medical professionals around the world reclaim their time, freedom, and peace of mind. Dr. Maiysha is a graduate of Emory University, completing her medical degree at Morehouse School of Medicine, and her Family Medicine Residency at Florida Hospital.