To Save a Physician Part 3: Dr. Lipski’s Secret 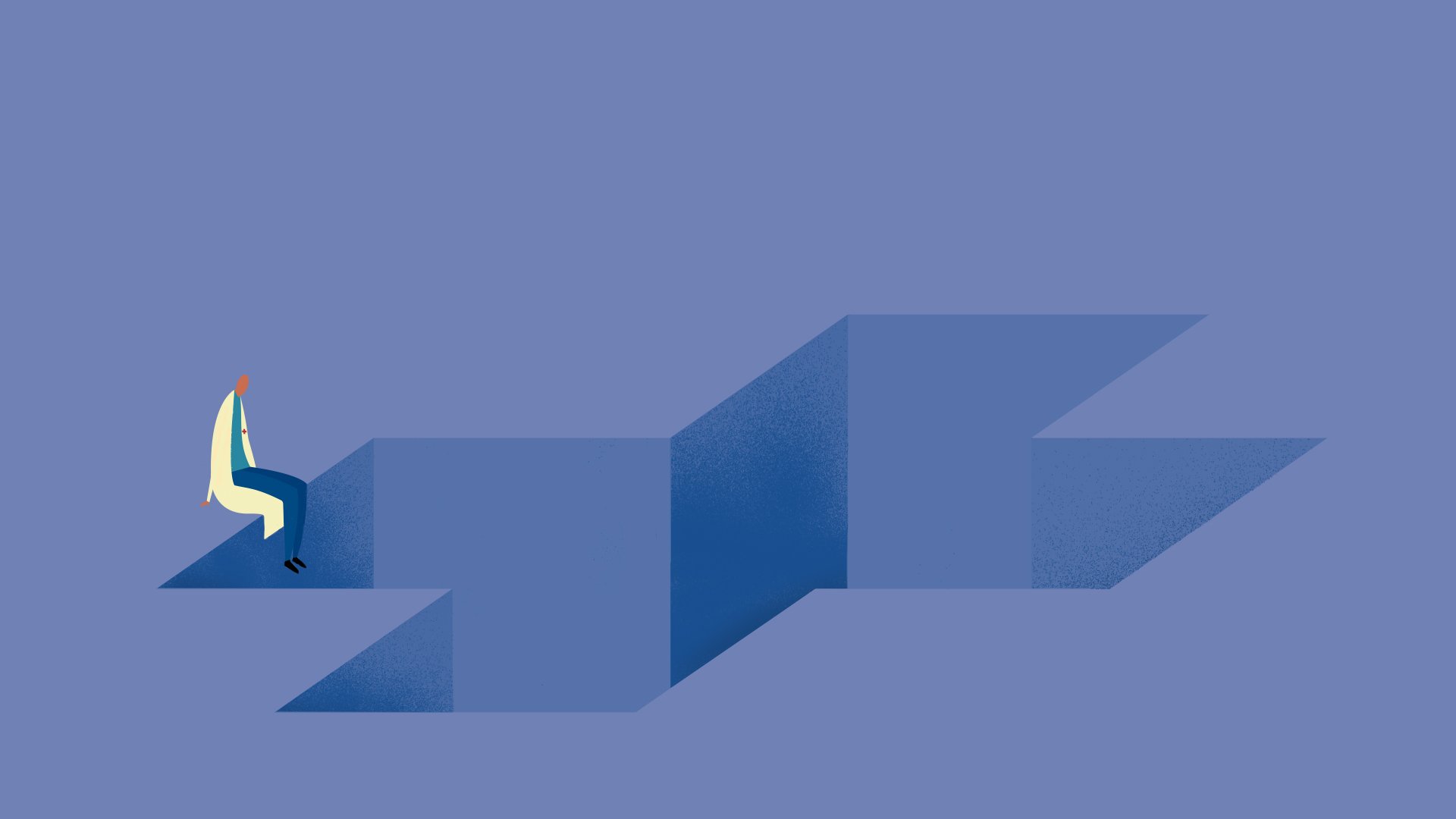 When Dr. Charles Rohannan of Memorial Hospital’s neurology department took his own life in episode one, administrators made the decision to turn the tragedy to good. Working closely with the Rohannon family and abiding by their wishes at every stage, they first encouraged Dr. Rohannon’s department colleagues to discuss the event, sharing their concerns about the circumstances, work conditions and attitudes potentially leading to a physician giving up hope. Then Dr. Rohannan’s wife, Eve, sent the hospital a video with her own reflections in episode two. It came with the family’s permission to share Charles Rohannan’s cause of death with the entire hospital staff. She—and the hospital’s administration—hoped the video would be a catalyst for an honest discussion, and it was. The hospital held discussion sessions, while Memorial’s Physician Wellness Program director, Dr. Helene Antuñez, worked with the hospital’s board to create a mental health program that providers could access confidentially.

The Struggle for Healing

Dr. Roberta Lipski of Memorial’s Leeson Oncology Center decided not to attend the meeting Dr. Ken Yamamura, the Center’s head, organized to show and discuss Eve Rohannan’s video and the hospital’s new program for helping physicians who were feeling depression and burnout. She didn’t need the pain.

She didn’t know Charles Rohannan well, yet she wished she could feel sorrow at his loss and empathy for his widow. But she couldn’t manage either. These days, she felt she was simply going through the motions of her life and job, caretaking for the dying, yet unable to do enough for them.

Unable to do enough. She turned the phrase over in her mind. An oncologist has to get used to losing patients, but after 10 years as an attending, Dr. Lipski was beginning to believe she was losing the ability even to put up a good enough fight.

There was so much in the way of giving her best, she felt. There was the endless charting on her laptop—two hours or so, at home, every night, just to keep her head above water. There was the punishing pace—my God, back in the day she had a little time to share a coffee and blow off some steam in the lounge. Now the lounge is used to store office supplies and she never has time to “recharge her battery” with people who understand.

There was, above all, also the overwhelming feeling of never quite being able to do her best. And if she wasn’t doing her best, what was the point?

Was the system at fault? Well, certainly, up to a point. But she felt something else, something in herself, was failing. Inch by inch, she was letting her old passion for medicine go, and she felt incapable of getting a hold of it and bringing it back, which surely, she felt, she ought to be able to do. She was smart, self-aware and experienced. Why couldn’t she hit “reset?”

There seemed to be a huge, immovable, invisible object installed between her and…what? The old energy, the old happiness, the old feelings of anticipation and focused usefulness she used to have the moment she entered the hospital, saw her colleagues in scrubs or waved hello to Janice or Frank in reception.

And, of course, there was the David situation; he was leaving her. He had been leaving her, emotionally, for two years or more, and now he had finally announced his physical departure: January. Happy New Year.

It was the David issue, she was sure, that had pushed her drinking beyond what people called “social.” She was pouring wine into a tumbler, not a wine glass, and “taking the edge off,” most nights, by herself. She did not like this habit; she did not like herself when she indulged in it, but the self-dislike diminished when she had a second and a third glass, sometimes a fourth. Then it returned, with a vengeance, the next morning.

She longed to share her feelings with Dr. Lana Harutunian, her closest friend at Memorial and a classmate from med school. But Dr. Lipski was scared—terrified, really—of saying anything to Dr. Harutunian about her deepest despair, her despair about medicine. Because without medicine, what did she have? What would be left of her if she came clean about that? About the fact she was slowly entering into a state of suspended animation when it came to the calling that had ruled her life since she was an undergrad?

One night, after pouring herself a cabernet, she found herself thinking about Charlie Rohannan. So competent, so personable, so well-liked—and he had ended it all. Had he felt the presence of the huge, invisible block between himself and his purpose? Had he felt his worth as a physician slipping away?

If he had felt any of those feelings, he had decided to act on them, she thought. He had refused to decline any further in front of everyone else, and himself. He had called a halt to the loss of his pride and his self-belief. He had “gone out” before he had become an object of pity.

And then Roberta shook herself—she stood up and actually shook out her hands and arms and took a deep breath. Her head was in a crazy place. She had her daughter Angela. She wasn’t going to abandon her daughter.

Still—the idea of simply sleeping…of simply letting go of all of these tormenting thoughts about who she was, who she had been, who she was becoming, surrounded her. Simply letting go of her life that no longer held any promises for her but a deeper and deeper sense of inadequacy and frustration. Letting go before she lost everything. Was it a completely crazy idea?

In the next episode: Dr. Lipski returns to work, feeling as if she had never left the night before. Will her colleagues share the news of what they had learned in the meeting the day before?

VITAL WorkLife offers healthcare organizations—no matter what size or where they are in the journey of supporting physician well being—a comprehensive suite of solutions designed specifically to reduce the effects of stress and burnout and improve work/life balance while increasing awareness and implementing measures toward suicide-prevention.

If you’re thinking about suicide, are worried about a friend or loved one, or would like emotional support, the National Suicide Prevention Lifeline is available 24/7 across the United States. Call 800.273.TALK (8255) or CLICK HERE TO CHAT with a counselor. 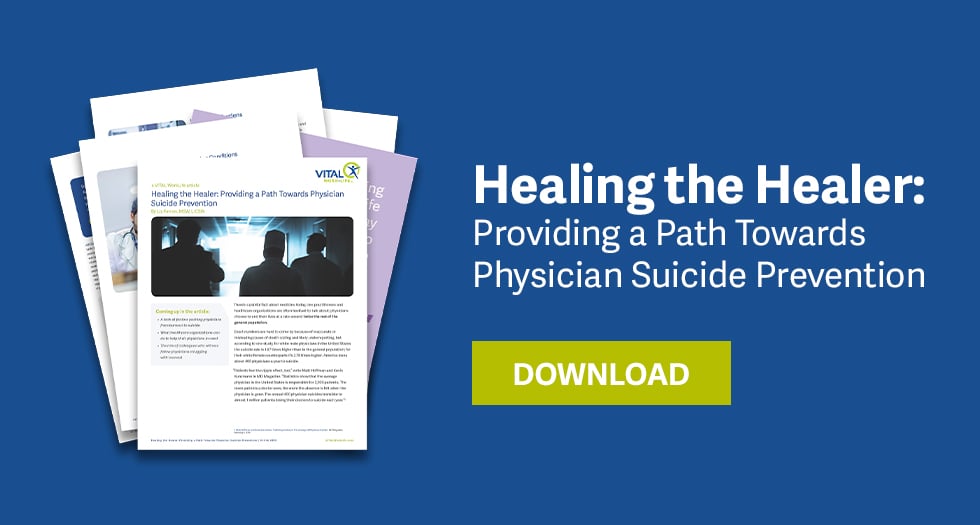