Bias and prejudice against practitioners is more common than you might think. Many documented case studies show how terrible and insensitive patients have been to those who are trying to help them most. Here are a couple examples:

If you are one of 59% of doctors saying they’ve experienced bias from their patients according to a 2017 Medscape survey, you may have an intimate understanding of the emotional impact it can have.

One of the questions in the Medscape survey was, “Has a patient ever made an offensive remark in your presence about your Age, Gender, Ethnicity, Race, Weight, Sexual Orientation, Religion, Accent, Political Views or Medical Education outside the US?”

As you can see from the table below, the odds of being the subject of prejudice at least at some point in your career is fairly high. 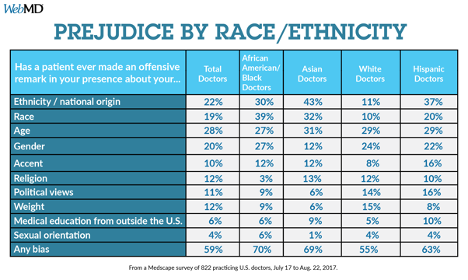 Singh et al notes more subtle racism may manifest in less cooperation with history taking and examination, or other behaviors that may not be immediately noticed.

What may appear to be bigotry, may indeed be something else. For example:

While situations like these may initially present misplaced fears or anger seeming to be bigotry it is important for you to understand there may be underlying factors causing their concerns. While doing the right thing to help with those concerns may be best for the patient it is also important to know that, as a highly trained professional, abuse and aggressive behavior should not be tolerated. The American Medical Association Code of Ethics states one may, “Terminate the patient-physician relationship with a patient who uses derogatory language or acts in a prejudicial manner only if the patient will not modify the conduct. In such cases, the physician should arrange to transfer the patient’s care.”

The topic of bias towards physicians by patients has gained more attention recently, and there is no doubt more to come regarding research, management of these behaviors, ethical and legal implications. If you are troubled by this topic, or have experienced or witnessed these types of biases, you should share this with your leader. Additionally, you can reach out to VITAL WorkLife to talk with a peer coach about this issue.

Physician Well Being Resources members can access their resources, including peer coaching, by calling 877.731.3949 or through the VITAL WorkLife App.

Shawn is a Senior Consultant for VITAL WorkLife. Shawn has an MEd degree in counseling from North Dakota State University, and is a Licensed Professional Counselor and a Certified Employee Assistance Professional. He has over 12 years of employee assistance experience and an additional 7 years as a counselor in a variety of settings. Shawn has expertise in the areas of anxiety and stress management, couples’ issues and critical incident stress management.