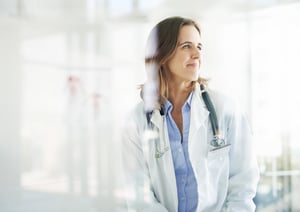 I read Chris Doty's letter about his resident's suicide, and by the end of the second paragraph, 16 years melted away. I knew this path. It was mine.

I had felt the grip of strangulating guilt, the crushing weight of failed responsibility, and the helpless torment of watching torture. I was a doctor, yet there was nothing I could do for one I loved. Being absolutely powerless can bring anyone to their knees. It did for me, until I realized that I had control over one thing: existence. If ever the pain of living exceeded endurance, planning a way to secure death gave me strength.

On Dec. 3, 1999, my husband and I took our practically perfect preschooler for a “reassurance MRI” to rule out a posterior fossa tumor. Reassurance was not to be found. Instead, normal life collapsed as my daughter's doctor ordered immediate ICU admission with a ventriculostomy kit at the bedside “just in case.” In the morning, my little girl left me for the OR yelling, “It's my brain tumor, and I want to keep it.”

She came back to me blind, mute, and totally paralyzed, and to make the situation exquisitely painful, she could hear and think like a normal 5-year-old. She was totally locked in.

I was locked out.

The anguish of the diagnosis mutated into unrelenting guilt. It was my fault. I missed the signs until it was too late, until the cancer had already invaded the brainstem. I signed the consent. I failed her. In those early days, more nights than not I prayed, “If there is a merciful God, I will not wake up in the morning.”

Radiation was the next step in the standard treatment for medulloblastoma. Whole head and spine radiation is devastating to a preschooler. The child definitely will be tattooed, possibly burned, and certainly never the same. It is a gift that keeps on giving: the risk of secondary brain cancers and strokes increase with each passing year. The bottom line: Consenting to whole cranio-spinal irradiation for my daughter would likely make her short, sick, and mentally impaired. It was also her best shot at life.

How could I do this to my girl after all she had lost? On the other hand, she had suffered so much already, how could I not play the full hand? An excruciating dilemma. Suddenly, it came to me. I knew ways to end suffering. If it came to unending misery for her, I hoped for courage. I certainly wasn't going to jail.

To say, “Today, I chose life” gave me a sense of control. But I also had a foolproof plan if the choice ever went the other way. I had plenty of prior training and current time to consider all the options. It was an era before Pyxis. Insulin became mine. It was easy access, hopefully fast enough, and relatively painless.

Two months after her diagnosis, I returned to work. Passing through those doors became a portal to another world. Every day I had the opportunity to relieve pain and suffering. I was competent. For those few hours, my crumbling world didn't exist. Work became a sanctuary from the unbearable.

I loved my sense of ordinariness at work. It didn't even feel like I was pretending to be normal. It was all good — until someone asked me how I was. I couldn't hide from direct questions. “There is nothing going on here that a 100 units of insulin wouldn't cure.”

Over several weeks, I had said it dozens of times. No one ever, not once, questioned my intent. I am sure some will be horrified how they inadvertently helped me down the path of rehearsal.

“I don't know how you do it” led me to question how I did. Words to that effect compelled me to glance in the med refrigerator to make sure the insulin was there. Holding the bottle the first time, I was surprised at how hard and cold it felt, but that seemed entirely appropriate for the situation.

“She's lucky to have you” translated to a fear of being unable to take away her pain. It was time to see if I would be caught unwrapping a syringe.

“You would do anything for her” pushed actions right to the brink. I stood there with an uncapped syringe deciding if it was that day or never.

The scales tipped to the side of never.

Honestly, I was like most others who had experienced a similar crisis. I didn't want to die, but I couldn't see another option to escape the persistent psychological and spiritual pain. By the time I was ready, she was different — better in some ways and worse in others. I could see that the path I was certain was ours actually wasn't. Obviously, I failed at accurately predicting the future. Maybe there was another way. I couldn't risk finality when there was potential to improve.

Backing away from the waterfall's edge was a cognitive and a relational task. It was a multifaceted approach. Attitude. Awe. Gratitude. Laughter. Prayer. Counseling. Finding others. Helping others. Exercise. Yoga. Dreams. Hope. I tried everything. I probably needed everything. For me, the greatest strengths among these were those who listened and cultivated hope. Some days, I didn't have any hope so I borrowed from those who did.

Critically important, I replaced the insulin mantra holding me prisoner in that negative space to “one day at a time,” sometimes to “one hour at a time,” and on bad days to “one minute at a time.” Serendipitously, I accepted an offer to watch sunrise from the rooftop with the head of security at work. Not only did this substitute for rehearsal time, but also it provided a sense of wonder and peace. Intentionally, I practice positive thinking by asking my daughter what made her proud or happy that day. I would then add something else that made me proud of her. Slowly, my distorted view changed.

The internet at that time was very new, probably not to be trusted. I had never sent an email. I needed to hear from someone who survived in this foreign pediatric brain tumor land. There were too few kids afflicted to find someone locally. I dared to reach out virtually, however, at first just to one. For weeks, he wrote that I was treasured and that he would always be there to listen to anything — unconditionally. We never wrote of suicide. Years later, I told him he made all the difference. He still does. I am never truly alone. He is in my heart, and I can forever play those words in my mind.

Looking back, I realize that I never would have been like that then if I had thought life could have been like this now. The experience was like cutting diamonds. It seemed at times that I could have shattered. Fortunately, a master craftsman appeared at the most critical junctures to unmask a brilliance hidden within.

The shadows on the dark side taught me a secret of life. It is compassion, the willingness to “suffer with.” People want to trust acceptance when sharing the darkest parts of their soul, and they don't want to feel totally alone. As my daughter says, “It doesn't matter what you say exactly; what matters the most is being there with them.”

My thoughts returned to Chris's letter. For 16 years, I didn't violate the unspoken rule: Don't speak of suicide. Shame and fear kept me complicit in the silence. I adamantly refused to take my last step to healing. I was not going to tell my story. It was too dangerous. What good could come from that anyway?

Suicide must have a light shined upon on it. We need to speak its name. It can be prevented. Perhaps knowing someone else has had these dark thoughts and found her way back could alter another's course. I'll never know for this resident from Kentucky, but I will not make that mistake again. 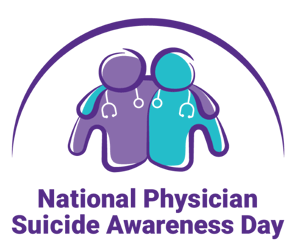 According to an article in Medscape, physicians have the highest rate of suicide of any profession, with a rate twice that of the general population. If you are having thoughts of suicide, please call the National Suicide Prevention Lifeline at 1-800-273-8255.

We offer solutions designed specifically for physicians and advanced practitioners to support their well being. Our resources are here to help strengthen relationships and families, promote healthy coping and lifestyle, help manage a busy life outside of work, develop leadership skills, assist with grief and loss, encourage financial health, assist with personal development and navigate the changing landscape of healthcare to the best of one’s ability.

Dr. Swisher graduated from the Medical College of Pennsylvania emergency residency program after an educational fellowship in the early 1990s. She has been the nocturnist in the ED at Mercy Philadelphia Hospital since 1997. Read her blog, Lions and Tigers and Bears and follow her on Twitter @L_Swish.